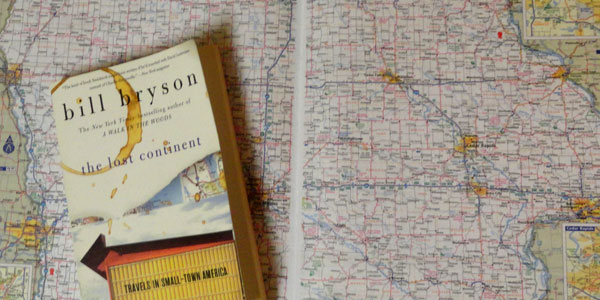 To continue on the theme of a solo man’s journey through America, I just finished reading Bill Bryson’s 1989 book “The Lost Continent: Travels in Small Town America.” His 1980s journey follows nicely in the footsteps of John Steinbeck’s 1960s “Travels With Charley” and William Least Heat Moon’s 1970s “Blue Highways.” The difference being Bryson didn’t have a dog and he drove a Chevy Chevette, not a van. Imagine doing nearly 14,000 miles in a Chevette, yikes. Bill had been living in England for a decade when he decided to return to his home country to make his self-consciously nostalgia-driven “journey of discovery”. As one does.
The road trip was completed in two segments, an Eastern loop and a Western loop, both starting and ending at his childhood home in Des Moines. As usual, Bill writes in his own special brand of snarky humor, but it seems even more amped up here than in his later books. Being a fellow native Iowan, my reaction to chapter 1 varied from “amused but mildly offended” to “laughing so hard I couldn’t breathe”. The insults he hurls at nearly every type of people he encounters are masterful and sometimes go on for paragraphs, such as one that begins with the line “Iowa women are almost always sensationally overweight…” If you think that’s bad, wait until he gets to the South: “The average Southerner has the speech patterns of someone slipping in and out of consciousness. I can change my shoes and socks faster than most people in Mississippi can speak a sentence.” (I can relate. In summer 2009 there was a language barrier incident at a Sonic drive-in in Tennessee we still laugh about.) In the end you know he’ll come around and learn to appreciate his homeland, “And I felt guilty for mocking them. They were good people” but the journey to that point is really quite hilarious.
Bryson visits popular landmarks around the country like Gettysburg, Mackinac Island and the Grand Canyon. He incorporates memories of traveling in the family station wagon in the ’50s and ‘60s with his current experiences. It’s interesting to compare his version of a place when his route crosses the paths of Steinbeck or Heat Moon. It’s even more interesting when his path crosses a High Kick Travel destination that we’ve recently experienced in person. Some I agreed with, like his take on the Hyatt hotel in Savannah; and some I did not, like describing the landscape around Devil’s Tower National Monument as a “flat, featureless plain” when in fact it is quite hilly and beautiful.
One observation I have is that in 1988 he must not yet have been a very good traveler. He gets lost trying to follow the simplest directions and basically thought nearly everything he saw was boring. When he complains that the mountains in Colorado aren’t interesting enough, I found myself saying out loud, “You lived in England!” I think a part of any great trip is finding something to enjoy at each turn, and there are a few points where Bryson seems to just be going through the motions to get from point A to point B. Maybe that’s just what happens when you’re in a Chevette for 14,000 miles.
Overall another must-read for any road trip enthusiast.

Like Loading...
This entry was posted in Travel Resources and tagged Bill Bryson, The Lost Continent, Travel Reading. Bookmark the permalink.