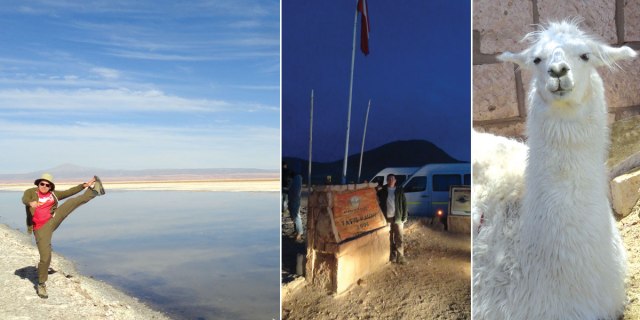 For the final segment of our South American adventure, we flew to the far Northern reaches of Chile to visit the Atacama Desert and its namesake town, San Pedro de Atacama. Getting there requires a 2-hour flight from Santiago to Calama, and then a shuttle bus for the hour and a half drive from Calama to San Pedro. The Calama airport is a single runway plopped in the middle of the desert, upon descent it appears you’re about to land on the moon. The shuttle service proved to be a bit leisurely in their departure time, but once we got going it was a fine drive to San Pedro and we were dropped off at the door of our hotel. Actually, everyone gets dropped off at the door of their hotel, so if you’re not one of the first few stops, you’re in for a long ride zigzagging all over town, kind of annoying since you can walk anywhere in town in 10 minutes. We selected Hotel Takha Takha (it’s what they call foosball) for our three night stay. The rooms are basic and a bit rugged with low ceilings but there is a nice pool area (although unheated) and free wifi near the office. Its central location was perfect as well.

San Pedro itself is a town of about 4,000 nestled in an oasis of green trees surrounded by the vast Atacama Desert and towering Andean volcanoes to the east. It sits at an elevation of 7,900 feet above sea level, so altitude can be an issue for some people. Also, since it is within the driest desert in the world, you’ll go through liters and liters of water to stay hydrated, we bought 16.4 liters in our time there, as apparently you don’t want to consume what comes out of the faucet. Pretty much the entire town is within walking distance so there’s no need for a car. Most of the streets are just dirt paths separating rows of single-story adobe buildings. Three types of businesses dominate San Pedro’s commercial area: restaurants, tour guide offices and artisanal souvenir shops, but somehow the overall vibe manages to not be tacky.

What brings most people to San Pedro de Atacama are the incredible natural sites surrounding the town. The way almost everyone visits the sites is to buy passage on board large vans or buses from a tour guide agency. Basically you choose what you’d like to see, find a tour guide with available seats and then be ready to be picked up at your hotel at the appropriate time. Except for more specialized excursions there isn’t any need to buy tickets ahead of your arrival, just show up and see what looks good. We had one special trip booked ahead of time and arranged three more while we were in town. If you find a good tour guide company you like, buy everything from them and make it easy. 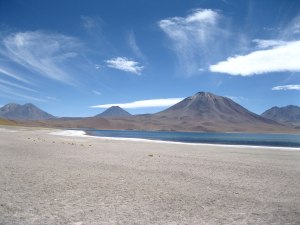 Our first was a half day trip to see the Salar de Atacama and Lagunas Altiplanicas. The Salar de Atacama is the third largest salt flat in the world, with white deposits of salt and minerals stretching out in a flat, 1,200 square mile expanse. Also in the Salar is a section of the national Flamingo reserve, where you can see the pink birds in their natural habitat. Lagunas Altiplanicas is a duo of high altitude (13,500ft) alpine lakes that reflect the brilliant sky and mountains. The road there was extremely rough, but the guides are used to it and just take it in stride while everyone bounces around. The tour was a great introduction to the region. When we returned to town in mid-afternoon we realized we had plenty of time to have lunch and then do another tour. A guide company found us last-minute seats and we headed off to the Valle de la Luna and Valle de la Muerte. The adjacent valleys contain wind and water eroded formations that resemble otherworldly landscapes. They were originally intended to be named after the Moon (Luna) and Mars (Marte) but a misspelling back in the day meant that Mars got renamed for death (Muerte), oops. Our guide began by taking us to some great viewpoints for photographs, and then drove us into the heart of the Valle de la Luna, where we climbed through some narrow salt caves and viewed more crazy rock formations. Excursions to this area generally leave San Pedro in late afternoon so that the end of the tour coincides with sunset in the valley. The last stop was at Great Sand Dune, where the van parked at the bottom and we all climbed up a trail and sat along a ridge with a fantastic view as the sun dipped below the horizon.

The following day we had pre-booked an excursion to climb a nearby volcano, Cerro Toco. Of the numerous volcanoes in the region, this one is the most accessible to non-professional mountain climbers. We booked through Turismo MiTampi, for a small group tour that included just the two of us, the guide and one other guest. We were picked up at our hotel at 7:00am for the hour-long drive to the mountain. When we were off the main highway, our driver and our guide Juan Pablo set up breakfast at the side of the trail and we ate a simple traditional Chilean breakfast of avocado, bread, cheese, ham and coffee from the tailgate of the Jeep. After a bit more rugged driving we passed a large telescope and arrived at the start of the trail to the summit. For future reference, when you’re higher than the observatory telescopes, you’re in seriously high elevation. The trail started just over 17,000 feet in elevation and climbed to the peak at 18,386 feet. For comparison, the summit of Mt. McKinley, the highest point in North America, is only about 2,000 feet higher and we were viewing that from a comfortable elevation of 3,300 feet last summer. At this extreme elevation there is only 45% of normal oxygen available for breathing and we were repeatedly warned to inform our guide of any ill feelings. Juan Pablo gave us a rundown of the dangers and set the pace for the climb, which is basically slow, smooth 8-inch steps the whole way up. The lack of oxygen makes even this slow pace feel extremely tiring. Every once in a while we stopped and Juan would check our eyes and pinch our fingertips to make sure we weren’t developing severe altitude sickness. Even though the trail is just over a mile in length with 1,000 feet in elevation gain, it took just over two hours to go up. The view from the summit is indescribable, with a 360 degree view of the Atacama, the conical Licancabur volcano, Bolivia and a seemingly endless string of volcanoes and mountain peaks to the south. There were high fives and hugs all around to celebrate our arrival. We spent 20 minutes taking photos and resting before turning back to the bottom. The way down was faster, at about an hour and fifteen minutes, but upon arriving at the Jeep, we found it sitting with its hood open refusing to start. Not the sight you want to see waiting for you. Our guides hitched us a ride down the mountain with another climbing group and in an hour we were back in the (relatively) oxygen-rich air of San Pedro. We spent the rest of the day doing lower-key activities like eating, drinking water, and browsing the artisanal markets. We also visited the Museo Arqueológico RP Gustavo Le Paige, which tells a detailed story of the history and culture of the Atacama Desert region and its people through a huge collection of artifacts. We highly recommend a visit. 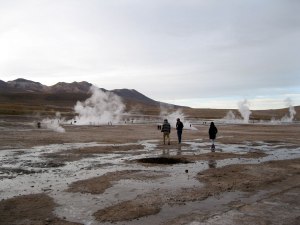 El Tatio geyser field just after the crack of dawn.

We had one more full day to spend in town, so we booked a trip to one of the most famous sites, the geyser field of El Tatio. This excursion is one of the more demanding as it requires a 4:00am wakeup to get picked up at 4:30. Visitors are wandering the dark streets like zombies at that hour, but it is necessary to leave early to arrive at the geyser field in the cold morning hours while the steam is still visible. Our guide Cristóbal gave us an awesome example of crazy South American driving, careening down a narrow, curving highway, passing other giant vans like they were standing still. So many excursions head toward El Tatio every morning that looking behind us on the road was reminiscent of the final scene in the movie Field of Dreams. We arrived to the steaming landscape just as the sun was coming up at 6:30. With over 80 active geysers his is the third largest field in the world after Yellowstone National Park in the U.S. and the Kamchatka Valley in Russia. We parked and were told to come back in a half hour for breakfast but otherwise were free to wander the area as we pleased. In such a remote location and without much tourism infrastructure, guests are allowed to just walk right up to the pools of scalding water. I even saw one man stick his GoPro camera into a geyser on a selfie stick. It’s cool to be able to view the features up so close, but at the same time it seems like the hundreds of people trampling all over are spoiling the natural beauty for future visitors. After breakfast we visited a hot spring where we were two of only about 5 in our group to enjoy a swim (how can you pass that up?). Then we stopped at a few wildlife viewing areas where we saw fancy ducks, vicuñas, flamingoes and llamas before making visits to the tiny village of Machuca and the Puritama River Gorge.

As remote as San Pedro is, the dining is rather impressive. We found nice lunch quiche at Salon de Té, and great salads at La Plaza Cafe. Our favorite dinner experiences were at Blanco, where we enjoyed wood-fired pizza and pasta in the company of a friendly Russian woman who kindly offered to share her table with us. The best overall was Adobe, where we had great traditional South American dishes with live entertainment from a band of pan pipes and drums. Maybe cheesy, but we loved it. As always delicious pisco sours are available everywhere.

If a visit to South America is in your future, put the beautiful, unique destination of San Pedro de Atacama, Chile on your must-see list.