When our friend and world traveler Sarah moved to the Cayman Islands last summer for work, we knew it wouldn’t be long before we were invited to the tropics. Direct flights are available from many major North American airports like Chicago, New York, Toronto and Atlanta, but since we were also planning a Florida portion of the trip, we flew down on the short one-hour flight from Miami. Grand Cayman’s Owen Roberts International Airport is about an hour flight south of Miami. It’s one of those little tropical deals where there’s no jet bridge, passengers just walk down the stairs from the plane onto the tarmac, we love that. We also loved the live band that struck up some Caribbean tunes while we walked from the plane to the terminal, what a great welcome. The other thing that welcomed us was the temperature. Even after spending 5 days in Florida, the heat and humidity hit us like a smack in the face. 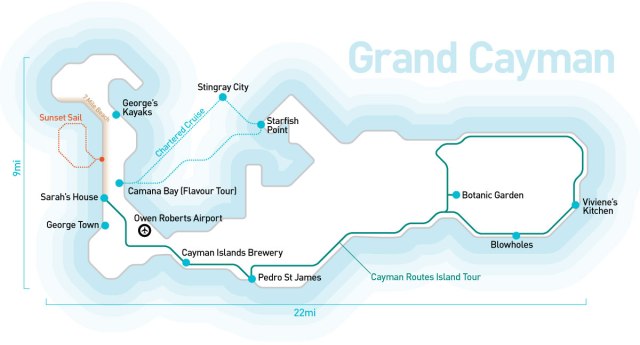 The Cayman Islands are an overseas territory of the United Kingdom located south of Cuba and west of Jamaica. It is governed mainly by the United Kingdom, but there is an elected legislative assembly to handle domestic issues. The result is some fun British quirks like driving on the left side of the road and Queen Elizabeth’s photo on the Cayman Island Dollar. There are also strong American influences due to the tourism industry and American Investments in the country. Pretty much all businesses will accept either Cayman Island or American dollars in cash. The vast majority of the 58,000 residents live on Grand Cayman, with small amounts about 90 miles to the northeast on the tiny “sister islands”, Cayman Brac and Little Cayman. Development is mostly on the western end of Grand Cayman with the capital and largest city of George Town located on the southwestern shore. That’s where cruise ship passengers arrive and local government is located. North of there is the famous Seven Mile Beach, recently named best beach in the world by US News & World Report. It is lined with resorts from end to end and full of people sunbathing, snorkeling, swimming, boating, parasailing, paddle boarding and any activity involving the bright blue water. Both the water and air temperatures are remarkably consistent throughout the year, making shorts, t-shirts and swimming suits standard attire year-round. The best time to visit is the same as Florida, in the November to April dry season. Hurricanes are a major threat to the low-lying islands in the wet season and have been known to cover almost the entire island with storm surges. 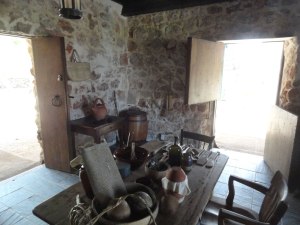 Our favorite Caymanian activity and a great way to get acquainted with Grand Cayman was our tour with Cayman Routes Island Tours. Shirley, the owner/guide is a native Caymanian who can trace her family tree to the first settlers, so she can answer any and all questions about island life. We selected the Eastern Route tour which began from our accommodations at Seven Mile Beach and took us the full length of the island. First stop was the oldest existing building on the island, Pedro St. James, a home built by a wealthy Englishman in 1780. A 4-D movie at the visitor center tells the history of the home with special effects including an artificial rainstorm. The building has been used as everything from a home to a courthouse to a jail, with many historic Cayman events taking place there. It was neglected for decades and was nearly a ruin in the 1990s when it underwent a 7-year restoration that brought it back to its former glory. It is now a National Historic Site of the Cayman Islands. 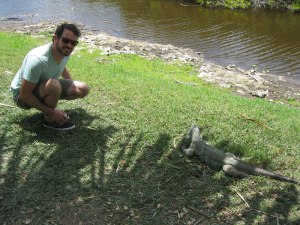 After Pedro St. James we headed to the Queen Elizabeth II Botanic Park in the center of the Island. It features tropical flowering plants from around the world on a backdrop of native Caymanian vegetation, since the plants that grow there are “practical, not pretty”. The area is also one of the habitats for the blue iguana, found only on Grand Cayman. This endangered species was once down to only 12 known animals, but captive breeding and release programs have gotten their number up to approximately 750 as of 2012. We saw several sunning themselves on the lawn and they love to pose for photos. After that we rode around the north coast of the island to East End where we stopped for lunch (more on that below). Along the southern edge of the island we viewed the Blow Holes, formations in the rocky shore that funnel incoming waves, causing them to spray vertically up to 20 feet. A local named Allan is the unofficial ambassador of the Blow Holes and will share his knowledge of the attraction and take well-timed photos of visitors with the water spray in the background. He’ll also do a pretty spot-on impression of President Obama! Shirley’s tours are flexible, so the first thing she asked us in the morning was if we wanted to add any more sites. She suggested Cayman Islands Brewing, and since we’ve never turned down a brewery visit, we made it our last stop of the day. The brewery was founded in 2007 and has been providing a variety of quality beers to islanders ever since. As we always recommend: drink local.

Obviously when on a small island, boating is going to be a popular recreational activity. We managed to fit three excursions into our four days on Grand Cayman. The first was a nighttime bioluminescence tour in Governors Creek with George’s Kayaks. After meeting George at the Yacht Club and getting situated in our kayaks, he led our small group on a half-hour paddle to a secluded mangrove forest away from artificial lights. Small organisms in the water react with a flash of light when disturbed, so brushing your hand or paddle through the water creates a sparkling trail of flickers. It’s very cool, but be warned you have to paddle into an extremely tight space in pitch darkness with tangled mangrove roots all around, it’s pretty creepy. One of us (Sarah) managed to get the kayak jammed sideways amongst the trees, causing brief panic. 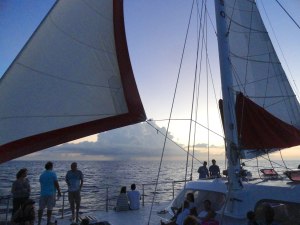 On Friday night we took a sunset catamaran sail with Red Sail Sports. They offer a variety of tours as well as private chartered cruises, so everyone should be able to find a tour that fits their schedule. Our boat left from the Westin Resort and Grand Cayman Beach Suites and sailed along Seven Mile Beach for two hours. When the crew is not raising the sails, they’re tending bar, so by the time the sun hits the horizon you’re sure to have a couple rum punches in you. Our final boating excursion was a chartered party boat in celebration of Sarah’s birthday. We were on board the Double Trouble with a capacity of around 30. Coolers are provided and the drink policy is BYO, so all you need to do is buy some beer or mix up a jug of something (Pimm’s Punch!). Our young captains picked us up in Camana Bay and steered us across North Sound to Stingray City. Back in the day, fishermen would hose off their boat decks in this area, washing food into the water. The rays have been coming ever since, attracted by the sound of boat motors and their promise of an easy meal. Visitors to Stingray City can get off their boats and stand in 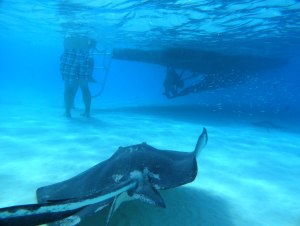 waist-deep water while rays swim around in every direction. If you’d like to hold a stingray, the boat captains will pull one up and put it in your arms. They’re up to 4-5 feet across and feel like wet velvet. After Stingray City, we cruised to Starfish Point to jump off the boat and swim around in the water (only saw one starfish). Then we headed to the nearby restaurant Kaibo for some early evening snacks before motoring back to Camana Bay after dark.

Cayman is known as a culinary capital of the Caribbean Region and our first night there we got a good overview by going on the “Flavour Tour” in the Camana Bay district. The tour meets every Wednesday at the West Indies Wine company and begins with a complimentary glass of champagne. After that the group walks around to four neighboring restaurants sampling a course at each. The route varies, so restaurants get a chance to prepare a different course on different evenings and diners can experience a different menu on a following visit. One of our favorites was the pan-seared lionfish at Michael’s Genuine. (Feel free to eat all the lionfish you want, because it’s an invasive species!) As part of our tour with Cayman Routes, we were treated to lunch at Vivine’s Kitchen, a small restaurant on the eastern coast of Grand Cayman. We selected the Cayman-Style Flounder, a local specialty generally prepared with catch-of-the-day fish, and featuring a tomato-based sauce with onions, peppers, carrots and rice. The fish was delicious and the setting is perfect. Another must-try local specialty is breadfruit. This fruit-bearing tree was discovered in the South Pacific region but has been introduced to many tropical regions around the world. It has a texture and consistency similar to potato. Apparently any cooking technique that works on a potato will translate to a breadfruit as well. We ate it as an appetizer, fried with a side of butter for dipping, yum.

We flew home to Chicago via Toronto after 4 nights in Cayman, and all it took was two flights and one trip through customs to make us wish we hadn’t left.

Read more about the Florida portion of the trip: Miami and Key West, National Parks
See the full gallery of images here.