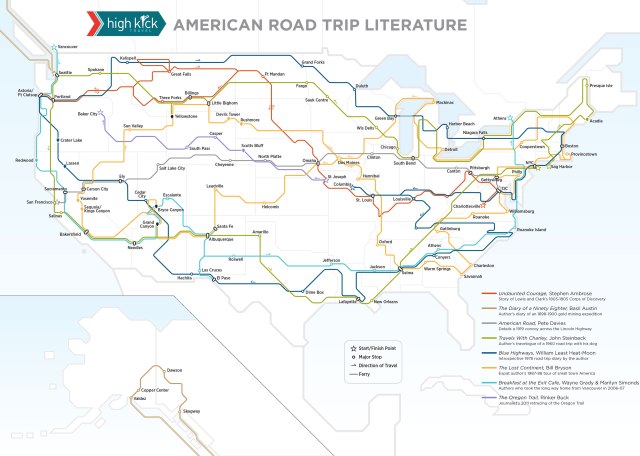 Here’s a map detailing travel books we’ve read. We’ll add to this as we add to our bookshelves. Click for larger view.

There are many classic books dedicated to the American road trip (or river or trail as the case may be). It’s a genre that never gets old to us. Each author sets out with a different goal, whether it’s exploring new lands, recreating a historic journey, getting away from personal matters, finding the perfect hash browns or simply sightseeing. It’s fun to compare our experiences to those who traveled before us.

The following books are mapped above:

Mapping where they went points out what corridors are common and where everyone diverges on their own. There is no one answer for where to road trip. Lewis and Clark took all water routes (since there were obviously no highways or major trails back then), but their Pacific camp, Fort Clatsop, has become a major attraction for the modern authors. American Road details the convoy that made an arduous 1919 promotional crossing of the mostly-dirt Lincoln Highway. When John Steinbeck made his highway journey in 1960, the first Interstates were a novelty, but just 18 years later William Least Heat-Moon made his entire trip about avoiding them, using exclusively two lane back roads for nostalgic purposes.

Meanwhile in the desert, Canadians Marilyn and Wayne couldn’t seem to find their way out of New Mexico and everyone wanders around in beautiful southern Utah. Many paths converge on historic Selma, Alabama and all writers get reflective of the troubling chapter of American history it represents. John Steinbeck was going strong until he reached this area of the south, then had a minor meltdown and made a beeline back toward New York City. Weirdly, we’ve read about three routes that pass through Delaware, but nobody makes it into Florida, Arkansas or Oklahoma. 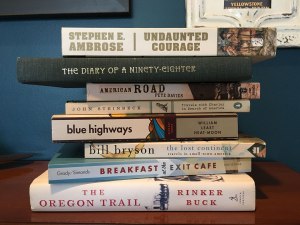 Emotional chords are struck from coast to coast. Steinbeck practically writes a marriage proposal to Wisconsin, while Bryson starts out ridiculing his native country but comes around to loving it by the end. Will Heat-Moon achieve inner peace? Will Wayne and Marilyn ever find Canada again? Put these on your reading list.

By the way: William Least Heat-Moon takes the gold medal for longest trip, at around 13,000 miles, and Bill Bryson put nearly 10,000 on his Chevy Chevette. Sort of makes our 4,572-mile record seem short.