Our first overnight stop was a visit to our road trip buds Emily and Jake in Iowa City, IA. Emily took us to this awesome historic bridge and tavern in Sutliff, where you can buy a beer and then enjoy it on picnic tables over the Cedar River.

We’ve passed under Kearney, Nebraska’s Great Platte River Archway Museum many times and finally decided to stop. It’s a great way to stretch your legs and learn some transportation history at the same time.

Monument Rocks in Kansas was the first site to be named a National Natural Landmark. No crowds here. 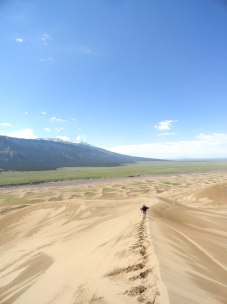 Roam freely on the dunes that tower up to 750 feet above the valley floor.

Sand board rentals are available for increased adventure. Just be aware that sand is not as soft to land on as you would think.

Medano creek flows around the edge of the dune field, redistributing sand and forming an important part of the natural balance.

Above the entrance to Mesa Verde National Park stands Point Lookout. It’s a moderately strenuous hike up, but the views of the valley 2,000 feet below are well worth it. 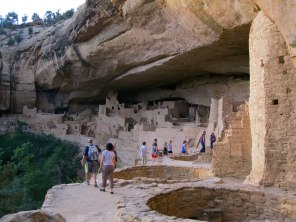 Our first cave dwelling tour was of the famous Cliff Palace. We chose the ranger-led twilight tour. 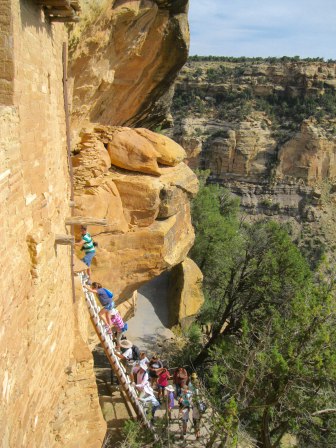 To tour Balcony House, guests must climb this 32 foot ladder. To exit a crawl through an 18-inch wide tunnel is required.

We made the 2.5 mile trek to Petroglyph Point to see the largest panel of ancient cliff artworks. 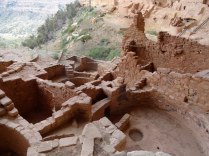 Long House is located on the distant Wetherill Mesa section of Mesa Verde and provides a different, less traveled experience.

Morning showers viewed from our room at the Far View Lodge. That pointy rock in the distance is Shiprock, nearly 45 miles away in New Mexico.

One high kick. Four States. This is some kind of record.

Monument Valley. We drove the bumpy, dusty scenic drive to see the towering sandstone buttes. Also, it was 100 degrees.

Sunset over Monument valley viewed from the side of Highway 163. 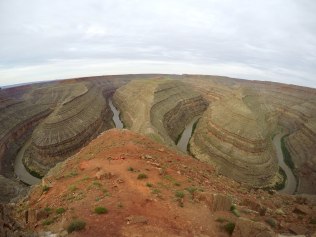 Utah’s Goosenecks State Park is a high viewpoint where you look down on an extremely twisty canyon formed by the San Juan River.

This is the Moki Dugway section of Utah Highway 261. It’s a normal paved highway except for a 3-mile section where it becomes gravel and climbs 1,200 feet up a mesa. Totally unexpected. 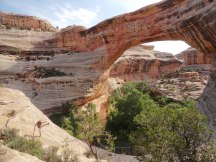 Natural Bridges National Monument contains 3 great examples of natural bridge forms. This is Sipapu Bridge, the second longest in the world (depending on who you ask).

Cutting across southern Utah to get to Capitol Reef National Park involved taking this ferry across Lake Powell at Hall’s Crossing. Nice rest for the car.

We entered Capitol Reef in the middle of nowhere by taking the Burr Trail north from Bullfrog, Utah. This set of incredible switchbacks took us up and over the “waterpocket fold,” a 100-mile wrinkle of tilted rocks in the landscape.

Some of the dome-shaped formations that give Capitol Reef its name. 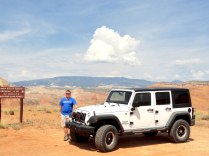 We rented this Jeep to tour the distant and inaccessible Cathedral Valley section of the park. Amazing sights at every turn. We even forded a river! 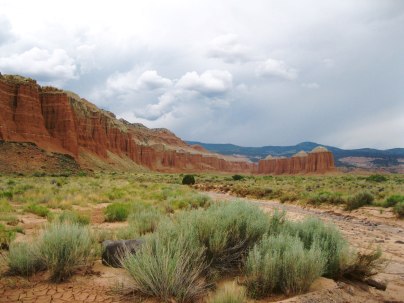 We weren’t sure what a gypsum sinkhole was, but now we’re glad we checked it out.

The orchards of the historic settlement of Fruita sustained a small community until the mid-20th century. Now the area serves as the main visitor area of Capitol Reef. 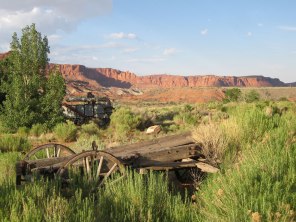 Picturesque old wagons were strategically placed around the Rim Rock Inn near Torrey.

A beautiful hike through Capitol Gorge led us to these pools of water in the stone. That’s where the name “waterpocket fold” comes from.

You really can’t sum up Capitol Reef in a few photos, but this one comes closest. 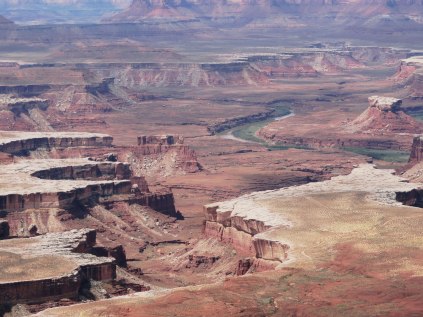 An overview of Canyonlands National Park. It just looks like this landscape goes on forever. 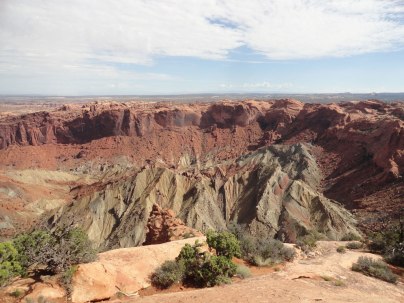 The Upheaval Dome is a circular formation that was either caused by a meteor or an underground salt dome. The jury’s still out.

A level 2-mile round trip hike took us to Grand View Point. Good thing the hike is flat, because it was too hot to do anything strenuous.

Landscape Arch frames the eastern side of Canyonlands and the La Sal mountains in the distance.

We entered Arches National Park in the dark of night in the rain to arrive at Delicate Arch by sunrise. The place is crowded at sunset, but we almost had it to ourselves at 6:00am. 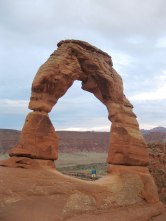 Neil inside the arch for scale. Erosion is a crazy concept.

Landscape Arch looks like it could collapse any day, but it’s still holding strong. In 1991 some big slabs fell off the underside, so you’re not allowed to hike under it anymore.

Just beyond Landscape Arch in the Devil’s Garden section of Arches. Just to the right of Nick is the former site of Wall Arch, which collapsed in 2008. 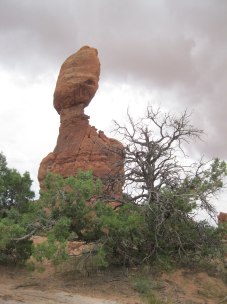 Balanced Rock. That about sums it up.

Double Arch was one of our favorites. So huge!

A ranger-led tour of the Fiery Furnace area is a must. Tickets are required, so check for availability online or in the visitor center.

Black Canyon of the Gunnison National Park protects the most dramatic section of the extremely deep and steep canyon.

This is the Painted Wall, the tallest sheer cliff in Colorado. This canyon is being cut down at the rate of an inch per century. It’s 2,250 feet deep at this point. 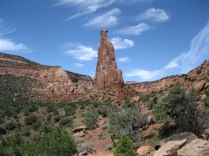 Colorado National Monument is just outside of the charming town of Grand Junction, Colorado. This is Independence Monument.

The Coke Ovens formations viewed from the rim drive. 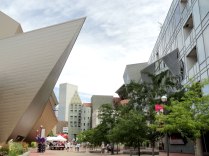 They love some crazy angles in Denver. 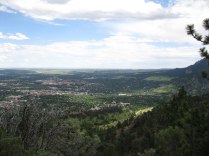 Overlooking Boulder, Colorado from Mt. Sanitas. It’s a great hike that starts right at the edge of town.

Just south of Denver in Waterton Canyon there’s a hiking/biking trail where there’s a good chance of seeing some mountain goats.

Scotts Bluff National Monument in western Nebraska was a major landmark for pioneers traveling west. Now you can hike up or take a road that passes through the only three tunnels in Nebraska. 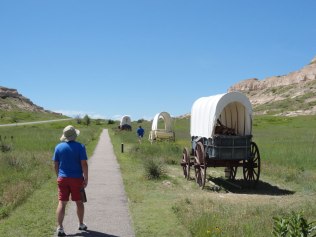 The Oregon Trail passed right by here. Replicas of the wagons they took west are on display for context.

Chimney Rock was another important landmark on the trail west. Just 20 miles down the road from Scott’s Bluff.

Tourist trap of the day, Carhenge! Just outside Alliance, Nebraska, vintage cars have been arranged in the same layout as the English original. Why? Why not?

Wind Cave National Park contains the current 6th longest cave system in the world. We took the candlelight tour which gave us a good idea what early explorers experienced.

In 2009 we visited our first national park together, Badlands. This year we swung through for old time’s sake.

Prairie Dogs and Bison share a landscape in the Badlands.

Mitchell Corn Palace in South Dakota. Sadly, the domes were sitting on the sidewalk awaiting installation, but the corn was being nailed on the walls as we watched.

It wouldn’t be a road trip without a Lewis and Clark encounter. Sioux City, Iowa has an informative interpretive center and the monument to Sgt. Floyd, the expedition’s only death. 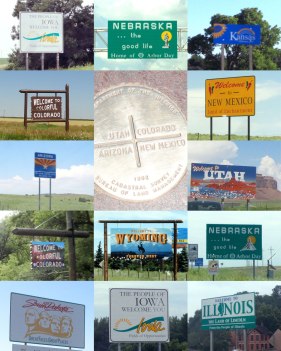