Heading north out of Tucson on Arizona Highway 77, we quickly left the population behind. The destination was Holbrook, 4.5 hours to the northeast. In between is a scenic landscape that might not be the typical “red rock and desert” that most people see when visualizing Arizona. It gives off more of a Colorado Plateau vibe as you continue north on U.S. Highway 60 beyond the town of Globe. The highway climbs up and over a few mountain passes, entering high altitude juniper forests. A little more than halfway through the drive we entered the scenic highlight of the day, Salt River Canyon. Here, colorful rock walls plunge 2,000 feet to the Salt River while the highway descends in a series of hairpin turns. We stopped at Hieroglyphic Point to take in the view from a precipice. From this vantage point it was easy to see where it gets the nickname “Little Grand Canyon.” At the bottom, there is a small rest area where travelers can walk across an old highway bridge and gaze up at rock walls all around. Just before reaching Show Low, the highway ascends the Mogollon Rim, the southern boundary of the Colorado Plateau, and enters a flatter landscape approaching Holbrook. 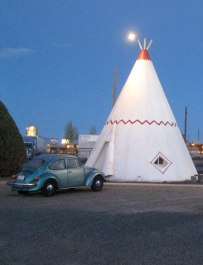 The town of Holbrook lies on the original Route 66 in eastern Arizona, 20 miles west of Petrified Forest National Park. It served as one of the inspiration towns for Radiator Springs from the animated Cars movies. The thing we were most excited about in Holbrook was our stay in the Wigwam Motel, tagline: Have you slept in a wigwam lately? A relic of the heyday of the Route 66 era, the motel features a collection of vintage wigwam-shaped rooms with mid-century cars parked around for effect. It definitely stands as one of the most unique rooms we’ve rented, and other than the awkward shower layout it was plenty comfortable.

The next morning we made the quick drive to the southern entrance of Petrified Forest. Since there’s one main north/south oriented road through the park, it works well to start at either end and simply make your way to the other without backtracking. The southern section near the Rainbow Forest visitor center is where the largest deposits of legendary Petrified wood can be found. It dwindles in quantity with northern progress, and the portion of the park north of Interstate 40 transitions into the scenic Painted Desert.

Close examination of the petrified wood along the Giant Logs trail.

A quick lesson on what petrified wood is: About 200 million years ago in the Triassic Period, the area that is now Arizona had a wet, tropical climate. Tall conifers grew in a forest among rivers and swamps. As trees died or were knocked down by flooding and wind, they were quickly buried by layers of mud and other sediment. Over time the wood tissue soaked up groundwater and silica, which then crystallized into quartz. Other interacting minerals account for the rainbow of colors on display. Today, after being buried for millions of years, the logs have been exposed by erosion of the sedimentary layers that were deposited on top of them. From a distance they still look exactly like fallen trees, but upon closer inspection their true material and mass is revealed.

Petrified Forest National Park contains one of the largest concentrations of petrified wood in the world. Immediately adjacent to the Rainbow Forest Museum is the Giant Logs Trail, where we walked amongst huge trunks as thick as 10 feet in diameter. Across the road, a 2-mile loop trail leads through the Long Logs section and to the Agate House, a reconstructed seven-room pueblo made of petrified wood. The trees at Long Logs are up to 180 feet in length and were left lying where they collected in a Triassic period logjam. Heading north on the park road, we took the 3-mile side trip to the top of Blue Mesa and hiked the one-mile loop. This area reminds us of a more colorful version of the South Dakota badlands with its blue, purple, pink and cream layering. A little further up the road we stopped by Puerco Pueblo, where the 100-room pueblo and nearby petroglyphs offer good examples of Ancestral Puebloan habitation of the park. We’ve come across the remains of these communities from Mesa Verde NP through New Mexico and now into Arizona and it’s always fascinating. After passing over the remnants of Route 66, the northernmost reaches of the park provide spectacular viewpoints overlooking the Painted Desert. The National Historic Landmark Painted Desert Inn has been preserved to highlight the 20th century rise of tourism and hospitality in the region. Reaching the other end of the park road we had a late lunch of Navajo Tacos at the Painted Desert Diner in the visitor center. Definitely don’t miss this traditional comfort food of fry bread topped with taco accoutrements when in Navajo country.

Our next destination, Canyon de Chelly National Monument (Chelly is pronounced “shay”), is located in northeastern Arizona on Navajo Nation land, just a 2.5 hour drive from Petrified Forest. It is one of the most visited National Monuments in the U.S. and is the only NPS unit jointly managed by a Native American nation and the National Park Service. This is the longest continuously inhabited place in the region, with evidence of population going back nearly 5,000 years. Several waves of residents left their marks on the canyon, providing an uninterrupted cultural record. 40-some families still live within the park boundaries, continuing the tradition. We began our visit by driving the 15-mile South Rim Drive to its end at Spider Rock, the most dramatic natural formation in the park. The canyon itself is impressive, with nearly vertical walls of red rock standing 1,000 feet over the valley floor. Spider Rock itself is a slim spire of rock towering 750 feet tall in the middle of the valley. In Navajo legend, its top is the home of Spider Grandmother, the creater of the world. We made our way back toward the town of Chinle making stops at several more overlooks while the sky lit up pink and purple with the setting sun. We retired to the Thunderbird Lodge for dinner, where the availability of menu items was spotty at best. Much to our horror, they had just run out of fry bread. Also remember alcohol is not allowed in the Navajo Nation, so don’t expect to have a beer with dinner or relax with a bottle of wine afterwards. We didn’t know this detail ahead of time, or we might have come prepared, but we hear it’s best to be very discreet if you choose to BYOB. 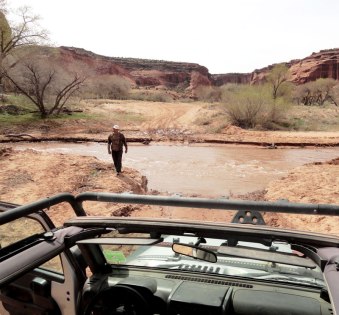 Our guide, Delbert, scouting the safest way to drive across this stream.

With the exception of the White House Ruin trail, visitors are only allowed on the floor of Canyon de Chelly accompanied by either a Navajo guide or a park ranger. Knowing this, we made a reservation with Beauty Way Jeep Tours for the next morning. We met our guide, Delbert, at a nearby campground and climbed in for our 3-hour tour. They also offer full-day tours and even overnight camping excursions. We rode into the canyon on a dirt road, but shortly thereafter made our way into the center of the stream flowing down the center. Long stretches of the trip were made this way, through several inches of water with massive sprays shooting out from the wheels. Along the way, we made stops at several locations to view ruins and petroglyphs and hear the history of the canyon and its residents with visual aids drawn in the dusty ground by Delbert. The whole Beauty Way operation is a family affair and we were lucky enough to catch up with Delbert’s uncle in a canyon with an insane echo, where he played a song on his flute. It was maybe the most memorable moment of the entire trip. Along the tour route, Delbert shared stories of his childhood experiences in and around the canyon and even showed us his plot of land on the canyon floor that he farms every summer. Having a native guide really made the experience special above and beyond a normal National Monument visit, it’s a must-do in this must-visit National Monument.