July 24-25, 2017
Crossing Nova Scotia is like traveling through a giant museum exhibit of North American cultural history, with intertwined nationalities and time periods. We began our visit to Annapolis Royal with some present-day Canadian poutine at Ye Olde Towne Pub, but the area is famously an early center of European colonization. Originally settled in 1605 as Port Royal by the French, the town was the capital of Acadie from 1632 through 1710, when a British siege took power and renamed it in honor of Queen Anne. Annapolis Royal then served as the capital of British Nova Scotia until 1749 when administration was moved to Halifax. The village settled into its status as a quaint small town with an impressive stock of National Historic Sites.

The best place to learn about the area is Fort Anne, the location of a defensive fort since the French first constructed one in 1636. The British made many additions and renovations on the same site over the following decades, resulting in much of the design that is visible today. Only a handful of buildings remain, but the star-shaped earthworks are intact. The officers’ quarters serves as the interpretive center, with in-depth displays and artifacts laying out the complicated history of the region from French, British and Mi’kmaq perspectives.

Our next overnight stopping point was Wolfville, just over an hour northeast via highways 1 and 101. This is the center of a popular Nova Scotia wine region, so there’s no shortage of choices for imbibing. We wanted to be as close to the vino as possible, and booked a night at the Old Lantern Inn Bed & Breakfast. It’s a beautiful location on the crest of a ridge adjacent to the Landscape of Grand Pré World Heritage Site. A grassy path through the vineyard leads directly to the Domaine de Grand Pré winery, tasting room and Le Caveau Restaurant. We made dinner reservations for later in the evening, but in the meantime were warmly welcomed by our hosts and got settled into the comfortable upstairs “L’Acadie Blanc” room.

We then made the short trip back to the main street of Wolfville to explore a bit. After strolling the street, the Annapolis Cider Company gave us a perfect spot to relax while sampling more locally produced beverages. The fertile soils that initially sustained the colonists continue to provide a bounty. In addition to wine grapes, orchards are big business, and Annapolis Cider uses all locally-sourced fruit at their downtown Wolfville cidery. For a reasonable price, we were given three generous pours that introduced us to their signature products. The breadth of styles represented will satisfy cider aficionados and newbies alike. One of the best meals we had on the trip was at the previously mentioned Le Caveau Restaurant at Domaine de Grand Pré, and their entrance displays the awards and recognition to back that up. The charcuterie, pork, rabbit and chocolate mousse plus a bottle produced on-site were all top notch. The following morning we also ate well at the B&B, where the house specialty french toast was amazing.

Just over the hill, the Landscape of Grand Pré World Heritage Site that celebrates Acadian culture in the region from its beginnings as a French colony through their expulsion from Nova Scotia by the British, all the way to their present-day diaspora. Within a couple generations of arriving in North America, the Acadians had become a distinct culture, self-identifying with the land and forming ways of life separate from France. The particular landscape of Grand-Pré is special because of how colonists ingeniously used a system of dike walls and valves to hold back the Bay of Fundy tides and make use of the rich marshland soil. They lived here peacefully for decades by farming, having good relations with the Mi’kmaq natives and remaining neutral in conflicts of European powers.

When the British seized Annapolis Royal and peninsular Nova Scotia in 1713, the king demanded they pledge loyalty to the crown, but that would have put them in opposition of their Mi’kmaq friends and French ancestors, so many stayed and pledged neutrality instead. Between 1755 and 1763, cornered by the demands of their land’s new government and still unwilling to be loyal, they were expelled from Nova Scotia in a series of deportations called the Grand Dérangement. Acadians were insensitively scattered to other North American colonies where it was hoped they would assimilate and reduce the threat of future opposition. Some settled permanently in other regions like Louisiana, where they formed the Cajun ethnic group, but many others eventually returned to their homeland in the Maritimes after tensions eased in 1764. Against all odds, their unique culture survived and remains vibrant to this day as evidenced by the Acadian flags we saw flying proudly all over Nova Scotia, New Brunswick and Maine. Our next leg of travel would take us deep into Nova Scotia’s Scottish realm, but we hadn’t seen the last of Acadian culture. 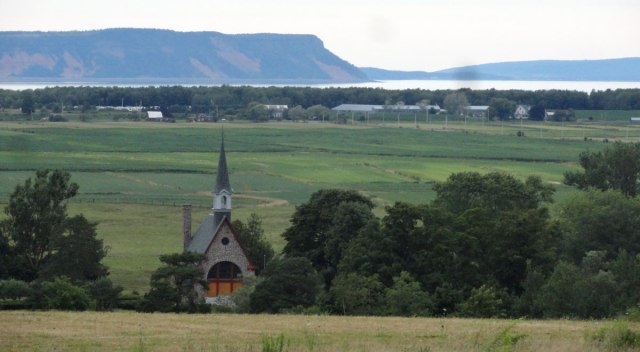 The Landscape of Grand Pré from the viewpoint on Old Post Road.

Up Next: Cape Breton Island
Previously: Nova Scotia – Digby to Keji
Previously: In & Around Bethel, Maine
Previously: Chicago to Maine

See the full gallery of images from the trip.