Model of the full town in the museum.

The fortified town of Louisbourg served as capital to the French colony of Île Royale (present day Cape Breton Island), during a time of fierce competition for North American dominance between European powers. Having just lost control of their colony in peninsular Nova Scotia to the British, the French constructed this heavily fortified town in 1713 to maintain a presence on the Atlantic seaboard. Despite only existing for 50 years, it holds an important role in North American colonial history. The British permanently seized Louisbourg during the Seven Years War in 1758, and then meticulously blasted the buildings and walls down to nearly nothing. For 200 years after its defeat, Louisbourg was a rough, mostly forgotten ruin. Interest was rekindled in the early 20th century, which resulted in the construction of a memorial and museum building. Later, in the 1960s when Cape Breton was suffering a collapse in mining employment, a proposal came forth to re-create a portion of Louisbourg as both a signature historic site and a way to put unemployed locals to work in skilled trades.

About a fifth of the town site was eventually rebuilt on top of the original foundations and opened to visitors in 1974. Louisbourg’s extensive blueprints, records of land ownership and possession logs were instrumental in allowing the site to be recreated accurately. Original methods were used to fashion historically accurate materials for each structure, literally down to the nuts and bolts. Today the village is “inhabited” daily by costumed interpreters who do a great job of bringing the 18th century to life. Each character can talk knowledgeably about his or her life and their job and position in town. A baker prepares 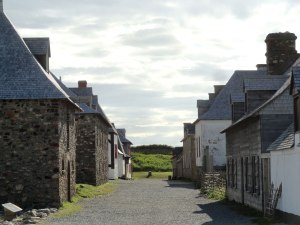 bread daily, the blacksmith gives demonstrations, a shepherd herds his flock down the street and the gardener let us taste the fresh spinach. Louisbourg is also still an active archaeological site, with exploratory tents set up on another part of the property during our visit. In the words of one Parks Canada employee, “You can hardly stick a shovel in the ground around here without coming up with an artifact.”

The authenticity of the site has been put to good use in several movie and TV productions. The 2000 film The Widow of Saint Pierre uses it particularly well as a stand-in for the French colony of Saint-Pierre circa 1849.

Most visitors arrive at the fortress via shuttle bus from the visitor center and spend a few hours browsing the site. We wanted to take it up a notch, so when we found out it’s possible to spend the night inside the fort we went for it. Our original plan was to camp, but the tents in the King’s Bastion grounds were already reserved. However, they ended up offering us something way better, the Lartigue House, the recreated home of a civil court judge who immigrated from Newfoundland amongst Louisbourg’s first settlers. This turned out to be one of the most unique and memorable lodging experiences we’ve ever had.

We were allowed car access to the site via a back entrance and met with a friendly Parks Canada ranger for the introductory tour. We were escorted to the Lartigue House expecting to find a rugged, simple dwelling, but were blown away to find a huge home with 18th century replica furnishings, a back yard with fire pit and a Keurig coffee maker in the kitchenette. It’s not luxury; there are only two rooms with electric lights, no shower (yet) and you have to bring your own bedding to place on the queen size mattresses, but it was way more civilized than the “camping with a roof” experience described on the Parks Canada website. A camp stove and electric lanterns are provided for cooking and lighting needs, and we purchased a bundle of firewood that was delivered right to our yard by a ranger.

During regular visiting hours, our status as overnight guests was indicated by pink wristbands. When the costumed interpreters noticed we were spending the night we replied “We’re in the Lartigue House.” We felt fancy. At 4:50pm, the soldiers march down Toulouse Street to the waterfront where they shoot a (crazy loud) cannon and then everyone except the pink wristband people are shuttled back to the visitor center. From then on, we had the whole town almost to ourselves, only occasionally crossing paths with the six camping guests. We were allowed to drive our car to the front of our house, which felt kind of surreal. At sunset we strolled through the village unattended and kept commenting on how surprising it is that we’re allowed to do this. It was like being in our own super nerdy theme park after it closes. We drank wine from our camping mugs, visited the sheep multiple times, and then sat by our backyard fire to watch the stars come out.

Making use of the props available for photos around town.

I’d be lying if I said it wasn’t a little bit creepy sleeping in an unlit period home in an empty town. There were some clunks and creaks emanating from the upstairs and the wooden shutters that got my attention, but I managed to drift off. The next morning we had to have our car out of the town by 9:00am so as not to ruin the illusion for the first guests arriving via shuttle bus. The most fun part of being there before opening hours was seeing the costumed interpreters before they were in costume. We took one last stroll around “our” town and said goodbye to the sheep before the whole place was all overrun by the masses.

After five days on Cape Breton Island, it was time to head back to mainland Nova Scotia. The drive took us back up past Sydney and then southwestward along the gorgeous Bras d’Or Lake that sits in the center of the island. In just under two and a half hours, we were exiting Cape Breton on the Canso Causeway just like we had entered. We had saved Nova Scotia’s largest city for last. On to Halifax.

See the full gallery of images from the trip.

2 Responses to Travelogue: Fortress of Louisbourg