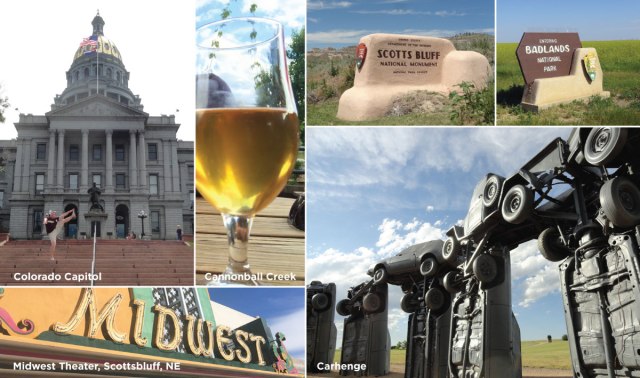 Interstate 70 between Grand Junction and Denver is known as an engineering marvel. It was one of the final sections of the originally planned Interstate Highway System to be completed, the final lanes through Cottonwood Canyon finally being opened to traffic in 1992. For a freeway, it’s a scenic and fairly demanding drive, with constant curves, steep grades and several tunnels. It hugs the Colorado River through narrow canyons for much of the western slope, then starts gaining serious elevation as it passes ski resort towns before crossing the continental divide in the Eisenhower Tunnel under Loveland Pass. At 11,158 feet in elevation and 1.7 miles in length, this is the highest point and the longest mountain tunnel in the Interstate system. After emerging from the east portal it’s all downhill to Denver.

We’ve visited Denver before, so this trip was mostly about re-joining society and meeting up with old friends. We got in some good hiking while in the area, with a steep hike up Mt. Sanitas in Boulder and a long walk through Waterton Canyon near Littleton. We had previously tried to summit Sanitas on our summer 2009 road trip, but had to turn back before reaching the top due to thunderstorms. This time we were successful, climbing the 1.255 foot elevation gain in 1.2 miles and then descending over rocky ledges back down via East Ridge and Sanitas Valley trails. The route is pretty strenuous for a shorter hike, but the views of Boulder, Denver and the Great Plains beyond are amazing. It was a preview of the landscape we’d have to cross to get back to Chicago, and the first level ground we’d seen since entering the Rockies two weeks earlier. Waterton Canyon is well known among mountain bikers in the Denver area because of the trails far in the canyon. For a relaxing hike or bike, a nearly-level 6-mile gravel road winds along the South Platte River in the foothills of the Rockies. Along it, herds of mountain goats graze on the steep slopes and come down to the river for water. We rounded a corner to the sight of 20-some goats standing right in the center of the trail, not bothered by our presence at all, just watching us watch them.

There is always good beer to be had in a Colorado, and our host introduced us to post-hike beers at Cannonball Creek Brewing in Golden. Their outdoor patio is a great place to share a beer with friendly strangers. Our favorite part is that the patio is dog-friendly and nearly everyone there had their pooch with them, including an awesome little Boston Terrier named Tater that we still talk about. We were also eager to get back into the brunch game after so much time in small towns, so we started our three mornings in Denver at Berkshire, Cafe Terracotta and Egg Shell. Most memorable was the Bacon flight at Berkshire, four flavors of meat and fat, prepare yourself. At dinner time, we enjoyed Mexican at Comida at The Source, in the up-and-coming River North district and got our fill of meat at modern chophouse Block & Larder, on Tennyson St. in the Highlands neighborhood.

We’ve covered Denver pretty extensively on other road trips, so check out these posts Elevated, Rocky Mountain Highlights, Kick of the Week Denver for further information.

Chimney Rock poking out of the Nebraska Plains.

While planning, we debated whether to return to Chicago the fast way, returning across I-80, or to veer north to visit some sites in South Dakota’s Black Hills. Obviously we chose the latter. We realized that on the way up north, we’d be passing some significant Oregon Trail sites, so the route was set. After passing through the southeastern corner of Wyoming, we re-entered Nebraska on a tiny state highway and made our way to Scotts Bluff National Monument, a high bluff of soft sedimentary rocks towering over the North Platte River and the plains. This landmark is the point where native, fur trapper and westward migration trails crossed through the Mitchell Pass. The bluff was called Me-a-pa-te by local tribes, which translates to “hill that is hard to go around”. Legend has it that a fur company clerk named Hiram Scott died near the site in 1828, coining its current name. The visitor center has great displays of artifacts related to western trail travel, and the rangers stationed there can summon the shuttle bus for a ride to the top. The drive passes through the only three road tunnels in the state of Nebraska, so try to contain your excitement. Once at the summit, short trails lead to viewpoints with distant views west to 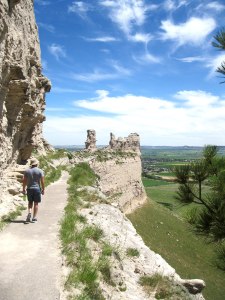 Laramie Peak and east to Chimney Rock. We took the 1.6 mile Saddle Rock Trail that leads back to the visitor center and parking lot. Another short trail at the bottom allowed us to view some of the original wagon wheel paths of the Oregon Trail. After a lunch of great sandwiches at Cappuccino and Company in the nearby town of Scottsbluff, we went east to Chimney Rock National Historic Site. It’s well-known as one of the most prominent landmarks wagon train travelers came across in Nebraska. This 300-foot tower of Brule clay, volcanic ash and sandstone was visible for days as the wagons slowly passed, reminding emigrants of industrial smokestacks back east. A small interpretive center plays an informative video and has a display of period artifacts and artistic representations of the tower. Moving right along, we made a detour to check out the kitschy roadside attraction that is Carhenge, in Alliance, Nebraska. Enormous vintage autos have been painted gray and arranged in the same configuration as the English original in tribute to the builder’s father. Onward though Nebraska’s panhandle, we realized that anyone who complains that Nebraska is boring has never paid attention to the scenery of the western part of the state. It’s beautiful out there, with rugged bluffs, wooded ravines and even some pine-forested sections. With barely another car in sight, we crossed into South Dakota en route to Hot Springs, on the southern edge of the Black Hills.

In Summer 2009, before we had developed full-fledged National park fever, we spent time in the Black Hills region and didn’t go to Wind Cave National Park. That error has haunted us for six years, and we needed to make amends, the main reason for our longer route home. Hot Springs is just 15 minutes south of the park, so we booked a stay at the Smith-Fargo Suites hotel downtown. Our Miner’s Suite was large and meticulously decorated, but to be honest the hotel was borderline scary. First of all, we arrived to find the building locked and had to call the owner to let us in. Upon being escorted to our room, we discovered we were the only guests in the entire three-story building. Also, there was an old woman mannequin standing at the end of the hallway. We survived the night without being ax murdered, but wouldn’t recommend the hotel for the faint-of-heart unless it’s a busier evening. The following morning we entered Wind Cave National Park where we had booked a 10:00am tour. This park protects the world’s sixth-largest known

cave system and the bison-filled landscape above. It is the seventh-oldest park in the system, created in 1903. There are many different options for cave tours, but after taking lantern tours at Jewel Cave and Mammoth Cave, for us electric lighting is no way to experience a cavern, so we selected the Candlelight Tour. Reservations for this tour are strongly recommended, and can be made up to a month in advance by calling the visitor center. Our guide was great, and our small group of 10 was much more appealing than the groups of up to 40 that were on their way to the Natural Entrance Tour. The 2-hour, 2/3-mile candlelight tour costs $12 for adults and allows guests to experience the cave the same way the original explorers and mappers did in the 1890s. For our only light source, each group member is issued a metal bucket converted into a lantern, just like the old times. In the farthest depths of the route, our guide stopped to tell a Native American origin story and had us blow out our candles one by one until we were sitting in complete darkness and silence, a rare treat for anyone. Back on the surface, we drove through the rest of the park, stopped for lunch at the Blue Bell Lodge in Custer State Park and passed by Rapid City on our way to the eighth and final national park of the summer. 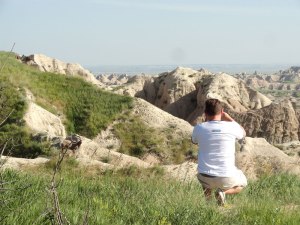 Photographing the wildlife of Badlands.

On that previously-mentioned 2009 drive, we made our first national park visit together, to Badlands. Six years later, with our current park total at 38, we came full-circle by entering the park’s western edge along Sage Creek Road. This 25-mile gravel stretch is away from the main scenic drive and not as dramatic, but very beautiful nonetheless, with giant bison herds and prairie dog towns along the way. We met up with the main Badlands Loop Road and drove it in reverse of our first visit, traveling leisurely west to east, before exiting the park and merging onto I-90 toward home. We spent that evening eating Arby’s in a worn out Days Inn in Oacoma. After not resorting to fast food for nearly 3,900 miles, we finally gave in when the glowing orange hat was the only restaurant in town still lit. The next morning we looked at the Mitchell Corn Palace, mostly because we think you’re just supposed to, and then finished off the rest of South Dakota at 85 miles per hour. There was one more highlight to look forward to that day, the Lewis and Clark Interpretive Center in Sioux City, Iowa and the nearby Sergeant Floyd Memorial. We rarely travel without crossing paths with our buds Lewis and Clark, and the Sioux City museum is a really great place to learn about their journey. The Floyd Memorial is a large obelisk on a bluff overlooking the Missouri River south of town, where the only casualty of the expedition is buried. Five hours later, across the impossibly green, rolling fields of Iowa, a home-cooked meal was waiting for us in Dubuque, our last stop before Chicago.

In total, we drove 4,572.3 miles on Interstates, 2-lane highways, country roads, gravel roads, and dirt paths while averaging 48 miles per hour and 40 miles per gallon. We took a ferry, forded a stream in a Jeep and even saw the sun rise one day. We also slid down sand dunes, climbed ladders and hiked 53 miles on foot, but still managed to gain weight, probably through our love of beer and good food. We were welcomed to 10 states, 8 national parks, 5 national monuments and countless historical sites. We still can’t think of a better way to see the country.

Our plans for spring break and summer 2016 are already in the concept and planning stages, so stay in touch to see where we appear next!